Did St Augustine Deny "Antipodes"? If So, in What Sense?

1:44 I take it the antipodal points of Milan and Carthage are right in the middle of the sea?

This has a bearing on a historical point.

St Augustine was in one moment actually denying there are "antipodes". He did not mean "antipodal points" he meant people walking with their "feet" exactly "opposed" to his own. Now, "feet opposed" is what "antipodes" literally means. Using it as short for "antipodal points" is secondary.

His reason had nothing to do with denying Earth is a globe, he just figured if they had crossed the Atlantic westward, they would have come back too, and humanity has only one origin. So, I am intent for the mathematical part on antipodal points ... since I recall a few years ago, I calculated in my own amateurish way that the antipodal points of the two mentioned cities (where St Augustine lived) are in the sea.

Here is my proof.

But instead of looking it up on google maps, its easier to confirm by going back to the antipodal map earlier in the video. 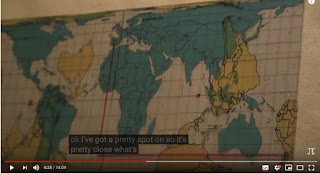 6:25 It so happens, the overlapping transparent map looks really transparent both in Tunisia and Italy.

To get to their antipodal points, then, you take a shop from Australia past New Zealand, and ... when you get there, you'd better stay aboard ship if you want to be an "antipode" to people in Italy and Tunisia. That is, walk with your feet exactly against theirs.
Posted by Hans Georg Lundahl at 3:03 AM