Reason & Theology Reviews a Debate · Who Erased My Comment? · What About the SSPX?

Someone in the cyber? Or Michael, on his channel? Or was it spam marked automatically because it included links?

First of all, for the moment you seem to have a point, see here:
https://www.youtube.com/watch?v=R3PDfBoyrSY

Second, while I was willing to concede a point on the Pachamama case, after hearing you, I now see this:
https://www.catholicnewsagency.com/news/42636/pope-francis-apologizes-that-amazon-synod-pachamama-was-thrown-into-tiber-river

Third, he seems pretty obviously to be into Old Earth and Human Evolution, not in the sense that we have family connexions to Neanderthals, but that we have such ultimately to brute beasts, on the physical side.

By now, I don't see any scientifically viable option of reconciling this with the Catholic dogma.

Pius XII may have been absentminded or never have heard of the argument when in 1950 leaving the issue in a kind of moratorium, but if Adam had been born of two non-human beings, they could not have had language and could not have taught him human language, and he would have been a feral child. The idea that he only became human after becoming physically adult is if possible even worse. Plus other objections I'd add to other scenarii, if you like to defend that.

Plus, clearly there is no sense in pretending, while accepting all the dates as given by scientists, that all real humans, all descendants of Adam, come only within the last 7000 years. This being so, Genesis 3 would be demoted from history, and God telling the serpent "I'll place enmities between thee and the woman, between thy seed and her seed" would not be known for a fact. Therefore Mary would not be properly speaking known as a fulfilment either.

Here is another that couldn't be posted:

2:58 Please to note, when it came to the infamous "magic wand" quote, I first saw a rumour of it, tried to get it verified or falsified by a Catholic newsoutlet.

I have not defitely argued from that one against him being Pope until I could verify it.

For another heresy, concerning at least the last two men known as Popes in the Vatican ("PF" supporting "B16"): 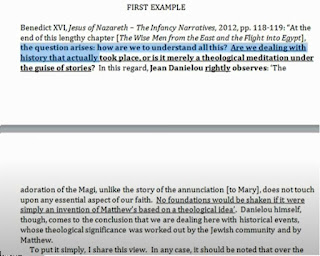