... and Scientists DO Fear Hell, Some of Them

0:48 So far you are giving a great reason why we shouldn't believe Galileo or Newton on heliocentrism either ...

Radioactivity and measuring the ages of rocks, as you said rocks and not their content, well, Ka-Ar dating is pretty sensitive to how fast the lava was solidifying and how much extra argon was trapped.

1:09 "that's only because nobody in the 1600's knew that our bodies are made entirely from non-life in the form of atoms"

In fact scholasticism considered our bodies to be made from exact same four elements as dead matter is made of.

Souls are NOT part of a body's composition and are NOT refuted today.

1:29 Now you are sounding like "the truth was just discovered yesterday and anyone who lived the day before was ignorant"

That is a fairly way out statement, if that is what you mean, and it's clear tendency to megalomania for the last very few generations gives a good moral ground for challenging the concept.

One of the questions being, were Galileo, Newton and Kepler right in being Heliocentrics?

2:25 Surveys, in US perhaps half of the scientists would be your way:

Scientists and Belief
November 5, 2009, Religion and Science in the United States
http://www.pewforum.org/2009/11/05/scientists-and-belief/

Seriously, the surveys are anonymous, so an atheist who goes to Church to keep mum happy would be free to tick "no God" without hurting his or her mum.

3:25 "only a tiny microscopic proportion of qualified reputable scientists believe in what the believer would call God"

While there are scientists who are "Catholics" and who aren't fully Theist (think of Kenneth Miller here), the usual presumption when someone states his belief as Catholic, Evangelical, Mainline Protestant is, he believes in God. 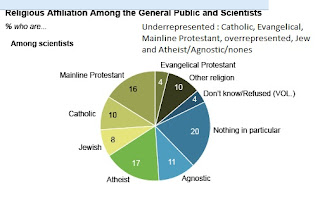 8:59 "if hell were real, we could watch TV or escape into fresh air"

Not if you are held firmly in place and your atoms wiggling too fast are continuously renewed so you are never killed by it, after resurrection.

That souls of the damned before resurrection can feel pain at physical fire, that is a minor miracle of a major punishment.

"if we go anywhere after death, we go there without our atoms"

But not necessarily to a place without atoms of combustibles and oxygen, for instance.

So, up to resurrection, when you get your body with atoms back, your soul needs a little miracle to feel that, just as the case is for the demons who don't have bodies in the first place.

Not quite so illogical that fires await the damned, after all.

9:19 And no, the threat is not mindless bullshit.

9:40 The flames do need combustible and oxygen and they are continuously renewed.

10:25 "You don't have to be a scientist to have a scientific understanding."

Goes both ways, for what you call "religious nutjobs" too.
Posted by Hans Georg Lundahl at 6:02 AM