Here is the video again:

Here Richard Middleton and I, disagreeing on important detail, go from event to doctrine: 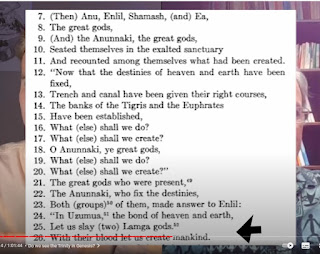 32:13For the texts included in Genesis, I would say the "us" clearly refers to the Persons of the Trinity. However, only very little could be said about it before the Incarnation.

God was fooling Satan into taking the life of God in payment for sins, as he had done with Adam and so many others who were kept at least in some outskirt of his domain, in the bosom of Abraham, excluded from Heaven.

If God had talked too clearly about the Trinity to people basically before the Resurrection, Satan would perhaps have taken the stance "better not try to kill Him through Pharisee tongues and Roman hands" and would not even have tried to seduce Him.

So, while Moses and each major tradition keeper basically from Heber and Peleg know what Genesis 3:22 or 7:11 meant, the other people were forced to guess. Or patiently try to not guess.

And with people who separated from Hebrews at new linguistic competences replacing old ones miraculously - they were guessing, and they guessed wrongly, and this along with sentimental reasons for idolatry in the case of Bel and Nin (lord and lord or lord and lady, since Sumerian is gender insignificant), led to the idea of polytheism.

It is so providential that "lamga gods" in English sounds basically like "lamb gods" meaning, the Babylonians, unwittingly, prophecied that the Lamb was slain when God decided to create man. God the Son very perfectly knew that He would die on a cross at Genesis 1:26.

But to Moses it was at least clear that "us" is Father, Son, and Holy Spirit. 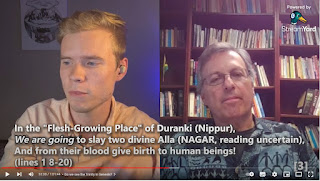 Sounds like the Babylonians or Sumerians were providing a cue to certain people that not "just" Isa, but Allah, was going to die on a cross. 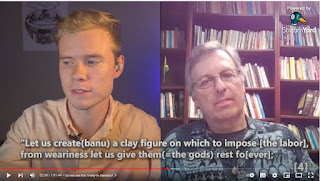 32:37 And the pagans didn't see how a reward for "clay figures" on whom labour is imposed would one day be requiem aeternam ...

38:24 It would not be anachronistic to say each major tradition bearer, all leading up to Moses, and even all going down from him, all the way to Caiaphas, knew of the Trinity but were forbidden to speak in clearer terms than the ones chosen in the Bible texts. To outsiders.

Why forbidden to speak?

Satan cannot read thoughts. Not notional thoughts. Perhaps he could do as much as detect what shape an object is you are thinking of, certainly he can detect your mood, but he cannot detect the notions you think of. But he can - and when he's on the other side of the earth some other of his crew of demons can - hear words.

So, the tradition of the Trinity and of the Incarnation, and redemption therethrough, was transmitted in secret, and under circumstances where demons were chased away - no demon there to hear it = no secret leaking out to Satan.

He was left to imagine Jesus was man and nothing else - the damned cannot see the godhead, so the damned whom He condemns will only see a man condemning them to Hell. Satan was damned, so couldn't see God in Jesus, and the setup was, Satan could not have overheard it from Cohanim or Prophets or Kings either.

The context in Kings, where an "us" - is not there in the throneroom scene! III Kings 22, whatever Michaeas overhears, in Latin and English, there is no "us" - so, unless Hebrew is different, you have no case for "us" meaning "God and his angels" ... God may have allowed non-Cohen Jews who were also not or bad Kings, to imagine the "us" in for instance Genesis 3:22 to imagine what you said (it seems to be the mainstream Rabbinic opinion) precisely to give a red herring, ultimately so he would walk up and whisper to Pharisees "didn't that other Yeshu do false miracles in Sweden/among SWabians and found Odinism?" to priests "Is he another Antiochus? Will he destroy your temple?" to Roman magistrates "Isn't he a fanatic who will create lots of trouble in the end?" and to Judas "aren't you tired of walking with him and having to regret your secret indulgences you buy from the money you steal? Get a piece of land, the priests will pay!"

All of which Satan would not have dared if he had knewn he was up against God in Person. More precisely in Second Person.

38:24 bis - unlike the throneroom scene where Michaeas saw God among angels, Isaiah 6:8 involves God telling Isaiah He was Three in One and One in Three.

39:09 The doctrine of the Trinity does not get direct and full public pronunciation to when Jesus tells the eleven how they shall Baptise, and a bit before, in the last Supper, when Judas was gone (an occasion where Satan was not there and had no spy who could hear - long discourse in John).

But the doctrine of the Trinity was while believed of the lowlier faithful in imagery, always believed by the major ones (Patriarchs, Priests, Prophets and Kings) in direct manner.

And in the hagiographers, it was even pure.

Then, there came a time when Christ said it should be said in the open.

40:39 The thing is, it's not the formulation, it's the truth I read into the earlier public wording.

Knowing that a tradition that ceased to be secret when Caiaphas as last Shadow of Christ was replaced by Cephas as first Vicar of Christ, was still already before that handed on beyond that public wording.

Btw, I hope the sons of Isaac Kaduri convert, and that they see the kabbalistic lore of their father actually showed him the same truth. Distorsions as dispersed as Protestant distortions are dispersed in someone about to convert.

The formulation was not as metaphysical in terminology in either Gospel or cited words of the Creed, compared to "homousios to Patri" which however follows from what is already given.

Given he was Assembly Movement, Open Brethren, it is probable he said some bad stuff in that book.

40:30 The kind of narrative understanding you give (as that of the earliest Church) can so easily lead to the erroneous doctrine of Patripassionism. Modalism. Sabellianism after a very early proponent.

Still, Sabellianism was promptly put out, and that would suggest the Church had more than just a narrative understanding.

The background story to Arius is given, by the way, in John Henry Newman, The Arians of the Fourth Century.

A very dogmatic book, not the least indicative of the Modernism he is supposed to have contributed to. And a book that on this issue makes more sense than F F Bruce - or what you have resumed him as saying. I cannot judge him entirely on your resumé, I haven't read him.

It is not "the implication it has for us today," it was the tip of the iceberg seen from its whole iceberg (or context) even for Moses, even for Peleg.

41:35 St. Timothy may have started out life as a Cohen or as a Pharisee. But he didn't start out as a Christian.

And because from thy infancy thou hast known the holy scriptures, which can instruct thee to salvation, by the faith which is in Christ Jesus.

St. Paul is saying Christ was the "missing piece of the puzzle" who put the rest into place, or more precisely, that faith in Christ was.

But no one is justified except by faith, therefore it is faith in Christ that Abraham had.

Then he said to them: O foolish, and slow of heart to believe in all things which the prophets have spoken.
Ought not Christ to have suffered these things, and so to enter into his glory?
And beginning at Moses and all the prophets, he expounded to them in all the scriptures, the things that were concerning him.

These things were concerning Him all along.

A piece of Bible code often shared is a cylinder for a very few verses in Genesis 1, to illustrate that the lamb was crucified from the beginning of time.
Posted by Hans Georg Lundahl at 6:51 AM

Labels: What Your Pastor Didn’t Tell You